Excerpt from Chapter-17 of Ash: Return Of The Beast

Excerpt from Chapter-17 of Ash: Return Of The Beast

The sixth candle began shaking, vibrating furiously. The flame flared beyond its natural capacity, filling the room with a blinding light. Cowl's body went limp as the intense brilliance subsided.

At that moment, Cowl's virtual double – enshrouded in a hooded robe – materialized in the restroom at the concert hall where Pastor St. Martin was in the process of unzipping his pleated black trousers.

Deep in thought about the protest he was about to lead against the Death-Metal band, Mega Therion – that abomination and corruptor of innocent youth – the preacher was about to relieve his straining bladder when his attention was suddenly drawn to an unexpected reflection in the mirror before him. He froze, staring at the dark hooded figure standing not five feet behind him. A crackling sound came from above. St. Martin looked up. The fluorescent tubes on the ceiling were flickering like strobe lights. A moment later the room went dark.

St. Martin panicked. He spun around, his piss spattering onto the green tiled floor. One fluorescent tube in the corner flickered and came on, barely illuminating the darkness with a dim, bluish glow. “Jesus!” he said, fumbling awkwardly at his zipper.

The preacher jerked back with a sharp gasp. He searched for a face somewhere in the dark void of the hood but he could only catch a tiny glint of light reflecting off the whites of the eyes. What is this? He believed in demons but… No… this must be some kind of a joke. A sick joke.

The Hooded Figure took another step forward, then stopped.

The preacher sucked in another gasp and shuffled backward until he was pressed up against the hard, cold porcelain urinal.

The Hooded Figure lolled its head to one side, then the other, casually studying the pathetic excuse for a man who was shaking like a timid mouse trapped in a corner.

The mouse swallowed hard, his eyes darting this way and that, wanting to run but unable to move. “Who are you? What do you want?”

The Hooded Figure advanced another step but stopped as its foot made a splat in the puddle on the floor. It looked down and shook its head. “Tsk-tsk. What have you done? You're a very bad little boy.”

“Now who's going to clean that up?”

“You don't know? Then I shall tell you.” The Hooded Figure's fatherly tone was gentle but firm. “You. You're going to clean this up.”

“You're going to do exactly as I say. Now get down on the floor.”

The Hooded Figure raised an arm as if to strike the man. “The floor, goddamit! Now!”

St. Martin dropped to his knees, trembling. Without looking up, he muttered, nearly sobbing. “Why are you doing this? What do you want?”

“Not on your knees, you fucking imbecile. Down! On your stomach!”

St. Martin slowly lowered himself face down into the stench of his own urine.

The Hooded Figure nodded approvingly. “Very good. Now squirm around like the worm you are until you've sopped up every last drop of your filthy mess.”

The preacher's will to resist was overpowered by a force beyond his comprehension. Whimpering like a helpless child, he found himself squirming and writhing around in his own liquid waste until his clothes were soaked.

St. Martin struggled to his feet, his legs quivering, his hands and face glistening wet, his clothes damp and wrinkled. He stunk of piss. The unpleasant odor wafted up into his nostrils. A chunk of vomit lodged in his throat. He gagged it down. It came up again. He swallowed. It burned his throat. His eyes welled up.

“I--I don't understand.” The preacher's voice was wavering and weak.  “What do you want from me?”

“Silence would be good.”

Silence? Somehow a moment of clarity had found its way into St. Martin's state of confusion and fear, offering a glimmer of hope. There must be other people in the building! He summoned what little will power he had left and acted on his flash of inspiration. “Let me go or I'll yell for help. I swear to God, I will.”

“Well, that would just ruin everything. But, if you insist, then by all means, please. Be my guest.”

The preacher was surprised by the response but wasn't about to waste another moment. He opened his mouth to yell but nothing came out. He tried again, every muscle in his throat straining, arteries bulging, his face contorting into hideous shapes. Again and again and still nothing. Finally, breathless, confused, shaking with fear, he sank to his knees and wept, pleading to God for this nightmare to end.

The Hooded Figure looked down at its victim and spoke in a measured, sympathetic tone. “I know. But it's almost over. Now get up and come toward me.”

The preacher's mouth moved as he tried to speak. Toward you? Again, no sound, but he could hear his own words clearly inside his own head.

“You heard me,” the Hooded Figure said. “Come here.”

The preacher then realized his thoughts were somehow being perceived by the hooded creature. The realization frightened him to the point of near madness. He was no longer alone in the sanctuary of his own mind. That frail barrier had been breached. The intruder was inside.

St. Martin's head dropped to his chest and he obeyed the command. He prayed as he moved against his own will toward the hooded figure. Our Father…

The Hooded Figure recited the prayer along with the preacher. “…who art in Heaven…”

The preacher struggled to hear his own inner voice over that of the monster. …deliver us from evil… But with those words he realized the futility of the effort. He left the prayer floating in limbo.

“What's the matter?” the Hooded Figure said. Forget the words?”

St. Martin's head lifted slowly as if it had become a tremendous weight. His eyes were empty.

“Too bad.” The Hooded Figure's voice was contemplative, almost compassionate. “It's a nice prayer, actually.” Then his tone switched abruptly. “But, no matter. We've got a couple more things to get done here. So let's get on with it, shall we? Come closer.”

St. Martin moved another step closer and waited – for what, he could not fathom. He didn't even try. He was an empty, distorted reflection of the once dynamic man who had, for years, passionately served the very God that had now, for some inscrutable reason, abandoned him to the will of this monster.

“C'mon. You know. The laying on of hands?” It raised an arm and extended a hand out of the dark sleeve toward the preacher's face. “Close your eyes. This might hurt a little.”

St. Martin's eyes suddenly clamped shut in spite of his straining to keep them open and the creature began to chant.

The very sound of the strange words caused St. Martin to recoil in horror. God in heaven! Help me!

St. Martin's eyes flew open, bulging from their sockets. A searing pain ripped through his skull and burned like a hot poker under his rippling skin. He knew his screams, his desperate wailing cries for help, were heard by no one but himself, inside his own head. Paralyzed by the will of the monster, he was helpless to do anything but endure the torture. How many times during his ministry had he told people they were destined for Hell and now Hell had come to him.

The hooded figure withdrew its hand and stepped back.

St. Martin collapsed to the floor, a quivering heap of a shattered soul. Crowley's rendition of the Lucifer Seal was now seared into the flesh of his forehead.

The Hooded Figure nodded approvingly and knelt beside the preacher. “I told you it might hurt a little.” The tone was mockingly sympathetic. “Now just relax. I'm going to prepare you for something special.”

The preacher's eyes pleaded for mercy.

“I know, I know. But we're just getting to the good part. You'll like this. Trust me.” The Hooded Figure slowly unbuttoned the preacher's shirt, spread it open, rolled the undershirt up to the man's chin and gazed upon the smooth canvas of naked flesh. “Ahhhh, yes. Very, very nice.”

The preacher struggled against the psychic straightjacket this monster had strapped around him. It was no use. His inability to move of his own will was pushing him ever further toward the edge of madness. He tried again to catch a glimpse of his tormentor's face but looking into the darkness of the cavernous hood was like staring into the proverbial valley of the shadow of death. I will fear no evil…

“Ah, yes,” the Hooded Figure said. “The ol' twenty-third Psalm. Very good. How's it workin' for ya? You know, my dear mother used to read that to me at night, just after making me recite something about 'if I should die before I wake'. I slept real good with that going through my mind. Do you make your kids say that one? I bet you do. I bet you fucking make your kids say that one.”

A pitiful noise gurgled up from St. Martin's throat.

“Yeah, that's what I figured.”

The preacher's eyes lit up. Someone was trying to open it. I knew there had to be someone else here! Help! Please!

Once more the preacher's silent pleas echoed inside his own head. Help! Please, help me!

The rattling stopped. “Damn it!” came a frustrated voice from beyond the door. The curse was followed by the barely audible sound of fading footsteps. The preacher's last glimmer of hope was walking away.

“Oh, come on. You didn't really think I'd let just anybody walk in here, did you? This is our time, just you and me. Now, be a good little boy and close your eyes. No peeking.”

Once again, St. Martin's eyelids fluttered uncontrollably as they struggled to resist the power that was drawing them closed. Dear God, this isn't happening! Tears squeezed out from behind his clamped eyelids. Don't let… Oh, Jesus… What is that? 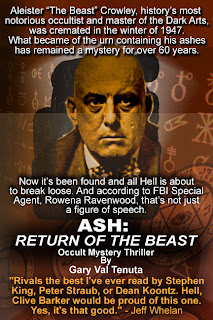