ATONEMENT
Another Twisted Tale
from the Files of the Second Chance Limousine Service.
(Click image for full size view) 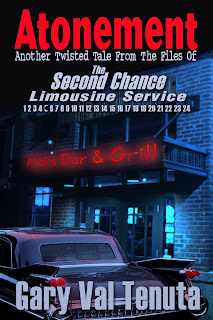 Charlie Harper
Had a wife.
He hired a killer
To take her life.
Remorseful now
And all alone
To save his soul
He must atone.
To his surprise
In a drunken trance
Charlie is offered
A Second Chance.
Will he succeed?
Or will he fail?
You'll have to read
This twisted tale.
Wanna take a ride?

"Atonement," (a short novelette by Gary Val Tenuta • 99¢ on Kindle • http://amzn.com/B00AZISY14)  like "A Bite Out of Time" (also 99¢ on Kindle • http://amzn.com/B002OHD2CK), is Another Twisted Tale From The Files of the Second Chance Limousine Service, but it is more thriller-drama than horror, as is A Bite Out of Time. On the tenth anniversary of his late wife Linda's abduction and subsequent murder, millionaire Charlie drowns his sorrows at the bar, then is too intoxicated to safely drive home. No problem, Second Chance Limo Service is here. Charlie falls asleep in the back seat, and wakes in the bedroom of the home he shared with his wife--awakens on the day of her death, a murder for which he has hired a contract killer. Now it's up to Charlie to change the path he took back then; but it's not only Charlie who acted, unbeknown to him, and he's going to find second chances are really just that: an opportunity to change the past, for better or for worse. This is a deep short story which will really make readers think.

ATONEMENT - Another twisted tale from the files of the Second Chance Limousine Service • A short story in 6 chapters • 99¢ KINDLE •
http://amzn.com/B00AZISY14 •

NOW AVAILABLE:
All 4 Second Chance stories in one volume!
Kindle $2.99 http://amzn.com/B00F07YZQS
This volume contains:
ATONEMENT
A BITE OUT OF TIME
1ST AVENUE ANNIE
THE GOOD LIBRARIAN