Sit back, grab some popcorn, and enjoy this creepy trailer for my supernatural crime chiller, ASH: RETURN OF THE BEAST

• "Rivals the best I've ever read by Stephen King, Peter Straub, or Dean Koontz. Hell, Clive Barker would be proud of this one. Yes, it's that good." - Jeff Whelan • 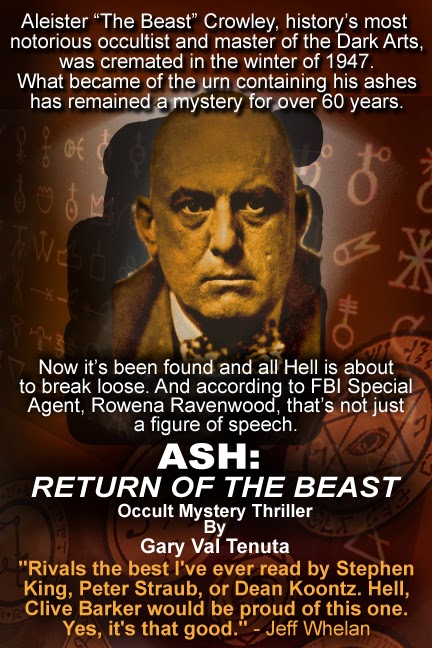 ASH: Return of the Beast is a modern-day supernatural crime chiller, a tale of revenge steeped in the occult. The story is a work of fiction inspired by a little known factoid about the death of Aleister Crowley (1875-1947), the notorious occultist whose favorite number was 666 and whom the British press once labeled as "The Wickedest Man In The World". Crowley’s body was cremated but the unexplained 1947 disappearance of the urn containing his ashes has remained a mystery… until now.

This diabolical tale propels the reader through a series of curiously interconnected events spanning the years from 1947 (and the death of Aleister Crowley) to the 1990s and the coming-of-age (and eventual stardom) of a "death-metal" rocker with the unlikely name of Rodney Duckworth.

• "Brilliantly conceived and executed. I couldn't put it down." - Rai Aren, author of Secret Of The Sands, Destiny Of The Sands •

The time-line shifts to the present day where Brian Kane, a gruff and gritty street-worn Seattle Police Detective, reluctantly teams up with the mysterious Rowena Ravenwood, an attractive and rather unconventional female FBI agent assigned to a most unusual investigative unit. Their task is to figure out why good, healthy, God-fearing preachers in their fair city are suddenly dropping dead... one at a time... exactly nine days apart.

What is the meaning of the strange symbols branded onto the bodies of these hapless victims? Are they all part of some bizarre cult? No eyewitnesses. No fingerprints. Is it really murder? Where’s the evidence? And what is the disturbing secret that Detective Kane is holding so close to his chest?

The investigation catapults Kane and Ravenwood headlong into life-threatening situations as they feel their way through the strange, dark labyrinth of the world of the occult and find themselves battling for their lives against the powerful forces of ritual magick.

• "Filled with magick... at times drawing one into the evil." - Ellen In Atlanta, amazon.com reviewer •

A bloody carnage of unimaginable horror is about to be unleashed upon the world as the offspring of the fabled “Old Ones” are awakened from their ancient slumber.

• "If you are a fan of Stephen King, you would like this occult thriller." - John C. Stipa •

The survival of the entire human race hangs in the balance and the clues to help solve the case are in desperately short supply. Worse yet, so is the amount of time left to stop the mysterious killer's reign of terror before all Hell breaks loose. And – according to Special Agent Ravenwood – that’s not just a figure of speech.

• I was hooked by the end of the first chapter and literally unwilling to put it down!" - Nikki, book blogger •

"Rivals the best I've ever read by Stephen King, Peter Straub, or Dean Koontz. Hell, Clive Barker would be proud of this one. Yes, it's that good." - Jeff Whelan, author of Space Orville

"It threw me for a literary loop, and I could NOT put this baby down!. The characters are very realistic... the plot is amazing. The twists in this story were terrific." - J. Wall, photographer, photographer

"Brilliantly conceived and executed. I couldn't put it down." - Rai Aren, author of Secret Of The Sands, Destiny Of The Sands, Lost City of Gold

“The writing was flawless, and the plot was so clever and enticing, that I would definitely recommend this book to anyone who enjoys occult mysteries. A riveting story.” – Sandra Carrington-Smith, author of The Book Of Obeah

"A page turner... dragging you into a world where few authors have successfully gone... to the Gates of Hell and back! The thrill ride alone is worth the purchase." - Valerie Bowen, author of the Mind of a Madman series

"Wow...Dan Brown fans watch out! It's gripping, tantalizing... I was hooked by the end of the first chapter and literally unwilling to put it down!" - Nikki, book blogger at Close Encounters With The Night Kind

“I wasn't so much reading the book as being sucked into the story with very little effort and seeing the story unfold in my mind through spectacular imagery...” – Michelle Parkins, South Africa

"The character creation is fabulous. I loved how [the author] pulled me into the world of demons, devils and the rock stars on their path to revenge." - Christina M. Condy, goodreads.com reviewer

"A good break after all the boy-meets-girl plots. Good writing... interesting concepts... a riddle and some clues to solve... I was reminded of Dennis Lehane. Very different from other horror fiction stories... even gave the whole Necronomicon tale a new spin." - Cyma R. Kahn, goodreads.com reviewer

"Filled with magick... at times drawing one into the evil." - Ellen In Atlanta, amazon.com reviewer

"Plenty of atmosphere and a compelling narrative. A worthwhile roller-coaster ride." - Bob Freeman, author of The Descendant

"What a great story – fast paced and exciting, right to the end." - Roxanne Bland, Of Werewolves And Other Strangers

"If you are a fan of Stephen King, you would like this occult thriller. It's not quite explainable and you can't tear yourself away." - John C. Stipa, Virginia

“The narrative takes a different approach to the run-of-the-mill Satanist storyline.The action builds nicely and we are drawn into the web of evil and dark revelations as the story progresses.The narrative is rich with details on magic, mystical cycles, and ancient gods and goddesses. For those readers interested in Crowley, dark magic, Satanism, and demons, Tenuta delivers. He avoids many of the cliché elements of Satanism narratives and gives us an action-packed story that moves along well.” – Drake Morgan at Horror Novel Reviews

Drop everything (unless it's breakable) and settle back for a good dose o' creepy. Episodes 1, 2, 3 and 4 of the illustrated audio/visual readings from the supernatural/occult crime chiller, Ash: Return Of The Beast, are up and running. The story is set mainly in present day Seattle and was inspired by the mysterious 1947 disappearance of the urn containing the ashes of history's most notorious occultist, Aleister Crowley, who referred to himself as "The Beast" and whom the British press once labeled as "The Wickedest Man In The World".
These illustrated readings are from the multi-part prologue, chronicling the strange events that led up to the present day mystery that became the most baffling and, ultimately the most dangerous criminal case that had ever landed on the desk of police detective Brian Kane. Fortunately for him he has the help of the oh-so-sexy (and tough as nails) Special Agent Rowena Ravenwood to help him solve the case. But that's later in the story. For the time being, turn the lights down, the volume up, go full-screen and get your creepy on. •