You blurb all day
You blurb all night
Blurb, blurb, blurb
Til the early mornin' light.
Hopin' your book
Is the one they'll choose.
And when the sales don't come
You feel like a bum.
You got the Indie Book Promo
Ain't gonna do it no mo'
Welcome to my pity party
Somebody shoot me boogie blues.

The reason why there are a million (well, okay, only a little over half a million on amazon) "How To" books on the subject of book marketing is because that's what every indie author wants to know. How to? Probably everything you read about the subject in those books is good advice, to some degree or another. Unfortunately, most of it isn't likely to result in a whole lot of sales. Why? 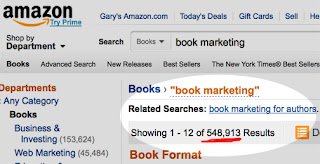 I suspect it probably has something to do with the fact that the market is now saturated to the hilt with books by indie authors. In a single year (2009 to 2010) nearly 3 million indie paperbacks were published (according to an estimate by Bowker's "Books In Print"). That breaks down to about 625,000 books a month! And that's just paperbacks! The number of ebooks published would likely double that amount. And it hasn't slowed down. If anything, the number of independently published books (paperback and ebook) published per year continues to increase.

That being the case, it's almost pointless to spend time promoting your book to a general population of readers. One of the best pieces of advice is to identify a specific target population, people who would be most likely to buy your book if they knew it existed.

You can find a lot of online sites, forums, groups and book clubs that are dedicated to a specific genre (for example, "Fantasy"). That's great. The only problem, for an author, is that it seems most of such groups are not particularly author friendly. That is, they either flat out don't allow authors to promote their books on the group pages or, if they do allow it, they'll have it set up so that promotions are only allowed in a specific "author promotion" section on the group site. A lot of the groups at goodreads.com are set up like that. That seems like a good idea, right? I mean, I can see the reasoning. If they allowed promos on the discussion pages, we pesky indie authors would invade in droves of Biblical proportion like a plague of locusts. Thing is, it seems most of the group members who aren't authors, (and that's usually the majority) never (or hardly ever) bother to check out the book promotion section. Why? Because most of them still seem to be under the impression that if you self-published your book, it's probably not worth reading. Anyway, the result is that the only people who visit that section are other authors whose primary reason for going to that section isn't to find new books to read. No, they're only there to post a promo blurb for their own book.

Authors promoting to other authors.

That's become the case all over the internet. There are a ton of book-related Facebook groups where authors are encouraged to promote their books but, again, it's just hundreds of authors promoting to other authors whose primary reason for being there isn't to find a good book to read. They're only on that page (for a minute or two) to promote their own book. People who actually want to find a new book to read rarely (if ever) go to one of those Facebook pages.

Of course authors are readers, too. And once in a blue moon, another author will see your promo blurb on Facebook or Twitter and they'll click the link and buy the book. It's rare, but it does happen. I belong to over a dozen book-related Facebook groups and I do post promos at least 2 or 3 times a week on all of those group pages but, honestly, I don't think it does much good. So why do I do it? I guess because at least I feel like I'm doing something!

What about purchasing ad space, like on goodreads.com or Facebook? Some people do get a few sales from those ads. I've tried both but they didn't seem to result in any sales.

What about Twitter? Seems like every author now has a Twitter account. But do promo tweets result in sales? Maybe, once in a while, but the problem with Twitter is that there's no way to know if a sale was the result of having tweeted a promo blurb. There's no way to track that. I use Twitter quite a bit but, to tell you the truth, I think it's probably more of a waste of time than it is an effective sales tool. Again, I think I do it only because it's there and it makes me feel like I'm doing something rather than doing nothing at all.

What about giveaways? I tried the Kindle 5-day free download thing. At the end of the 5 days, nearly 500 copies of my novel (Ash: Return Of The Beast) had been downloaded. I have no idea how many of those 500 people actually read the book after they downloaded it but none of them bothered to post a review on amazon. Getting reviews is really the primary reason for giving the book away in the first place. The more reviews your book has on amazon, the more likely it might attract other readers.

Some people have had better luck with the giveaways but, from what I've heard (from other authors who have tried it), it's not all that effective. Some authors have argued, saying, "Well, at least now my book is being read by hundreds of people!" Well, maybe. What they don't seem to realize is that there are 10s of thousands of people out there who are practically addicted to scarfing up as many free ebooks as possible just because they can. They'll probably never get around to actually reading most of them.

What about personal blogs? I'm pretty much a newbie when it comes to blogging. This blog has only been in existence for a few weeks and it's had only a little over 500 page views. All I know, at this point, is that those 500+ page views haven't yet translated into a single book sale. But, like I said, I'm still new at this and looking forward to seeing how it goes.

Another suggestion you'll often find in those "How To" books is to "engage in conversations with readers without necessarily promoting your book". The idea is that sooner or later, as people get to know you, they'll want to know more about your books and that will result in sales. Been there, done that (still doing it) and it's not all that effective. Nothing wrong with engaging in online conversations with people who love books but the bottom line is you'll end up investing a LOT of time for very little (if any) actual return in terms of book sales.

So what's an author to do? That's what we ALL want to know. The best advice I can offer is to just do what you can (all of the above) with the realization that it's probably not going to result in a lot of sales. And while you're doing those various promo activities, keep on writing! Get another book out there. Or a series of short stories or novellas. The more books you have available, the better the odds of getting sales. If you have one book available, you might only get 2 sales in a month. But if you have two books available, and two of each are purchased, you've collected royalties on four sales that month, and so on. It takes time for the sales numbers to build up. But as your sales numbers increase (along with the number of reviews), so does the ranking of your books in amazon's system. The higher the ranking the more visible your book will be for people using key words to search for specific kinds of books on amazon.

Of course there's always the possibility that your book contains that undefinable magical "something" that excites the first few readers so much that they tell all their friends they just have to read it, and then it becomes an over-night cultural phenomenon, in which case a big publisher will offer you a ton of money for the rights and you'll no longer have to suffer the Indie Book Promo - ain't gonna do it no mo' - welcome to my pity party - somebody shoot me boogie blues.
Posted by Gary Val Tenuta at 4:50 PM